Zenker’s diverticulum is a condition where there is outpouching of the posterior pharyngeal constrictor muscles. It is one of the three types of esophageal diverticulum. It is most commonly seen in elderly men, usually more than 60 years old, often 75 years older.

Symptoms of zenker’s diverticulum include dysphagia (difficulty initiating swallow) and obstruction of food. Patient often experience regurgitation of food out onto the pillow at night (Gastric to Esophagus → Esophagus to Pharynx). Another common complaint from partners of patient with zenker’s diverticulum is Foul breath from food particles (halitosis), repeated clearing of throat. Sometimes, there may be a variable neck mass. 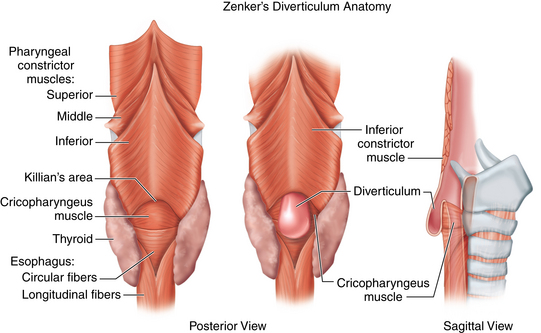 The diagnosis of zenker diverticulum is best done with Barium Swallow studies, typically combined with dynamic continuous fluoroscopy while the patient is swallowing the contrast. It is also the most initial diagnostic test that your doctor will do when they suspect zenker’s diverticulum.

In some patients who have a large diverticulum, the entire glass of barium contrast will drip into the diverticulum instead of flowing down the esophagus. On the other hand, some small diverticulum may be missed.

In patient who have difficulty swallowing, an alternative approach using transcutaneous ultrasound, especially when trying to differentiate the causes of neck mass such as thyroid mass versus neck mass from zenker’s diverticulum.

Diagnostic procedures that are contraindicated in patients who are suspected or well known for zenker’s diverticulum are nasogastric tube (NGT) and Esophagogastroduodenoscopy (EGD) due to risk of perforation from blind introduction of instrument.

There is no medical treatment for patients with zenker’s diverticulum. They are typically treated surgically. However, when surgery is not possible in many symptomatic older patients who are poor surgical candidates may attempt other minimally invasive procedure with endoscopy.

There are generally two types of endoscopic treatment: Rigid endoscopy and flexible endoscopy.