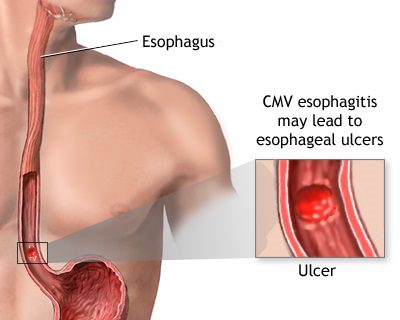 Esophagitis is a generic term used to describe inflammation of the esophagus. There are several types based on etiology. These conditions present with pain on swallowing (odynophagia) as food rub against the inflamed esophagus during swallowing of food.  The 4 types of esophagitis we will touch on are as follows:

Infective and Drug induced esophagitis cause odynophagia in most cases. In erosive esophagitis, usually odynophagia (pain on swallowing) is present if there is esophageal ulcer

Diagnosis and Management of different Esophagitis:

The type of esophagitis can be diagnosed and differentiated with upper endoscopy.

This is seen in AIDS patients; likely due to Candida infection in 90% of the time especially if the patient is diabetic. Other infection cause include CMV, Herpes simplex virus as we have mentioned above.

Do not need oral thrush to diagnosis, can have esophagitis without oral thrush

Treatment of Infective esophagitis: The treatment depends if the patient is HIV Positive with CD 4 < 100: In patient with HIV positive, the following are the management for esophagitis suspected before upper endoscopy.

In HIV Negative patients: upper endoscopy is done to evaluate the cause of symptoms.

GERD is treated with PPI as mentioned in other section. See GERD

Clinical Presentation: odynophagia (pain of swallow only) and retrosternal pain are present on swallowing. This is unlike Diffuse spasm (random intermittent chest pain and dysphagia instead of only during swallowing). The point is that odynophagia can happen with diffuse spasm but does not have to. Whereas pill esophagitis are almost always associated with swallowing pain.

Diagnosis of pill esophagitis: Usually made by clinical diagnosis but can be confirmed with upper endoscopy (show ulcers with normal appearing surrounding mucosa)

Differential diagnosis – Candida (usually have oral thrush though not needed, and in HIV patient with upper endoscopy with white plaques in esophagus; HSV (vesicles and round/ovoid ulcers; CMV (large linear ulcers are present instead)

Treatment: The main stay treatment for pill esophagitis is drink more water after taking the pill and remain upright for at least 30 min after pill.

The cause of eosinophilic esophagitis is unknown.