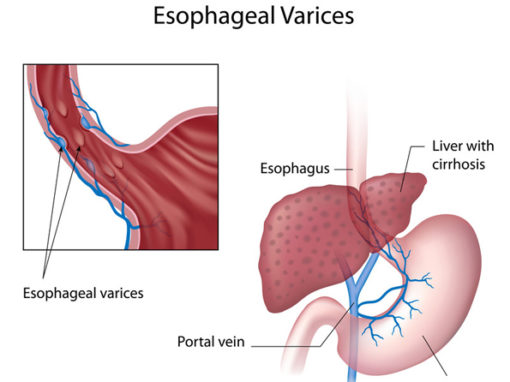 Varices are dilated tortuous mucosa or submucosa veins that most commonly develop in the lower esophagus and Proximal Stomach. It is very common in patients with cirrhosis. This is because blood flow to the liver is blocked by the scarring liver. The backup pressure, increases the pressure inside the portal vein (which carry blood from the intestines to the liver.

When the blood pressure in the portal system is high (portal hypertension), the pressure back up and can cause dilation of veins. Portal hypertension causes an increase in the blood pressure in the veins in the lower esophagus and stomach. Because these veins are not meant to tolerate high pressure, they expand, dilate, resulting in varices. As the varices dilate and develop, they can overdistend and rupture, causing variceal bleed.

Etiology and Pathophysiology of Esophageal varices:

Esophageal varices are usually asymptomatic. It is estimated that 15% of patients who bleed from varices will die, emphasizing the need to prevent so. Varices do not cause symptoms until they rupture, causing massive painless bleeding, presenting as hematemesis, black stools, lightheadedness or loss of consciousness.

Have risk of rupture of the esophageal vein and present with painless hematemesis, dark stools, and lightheadedness. In addition to bleeding, all the symptoms of liver cirrhosis including portal hypertension complications such as ascites, hepatic encephalopathy, splenomegaly, gynecomastia, pedal edema, coagulopathy can also be present.

Esophageal Varices rupture: Most common cause of death in patient with cirrhosis (50%) (which causes the portal hypertension). A ruptured vein can cause potentially fatal hemorrhage 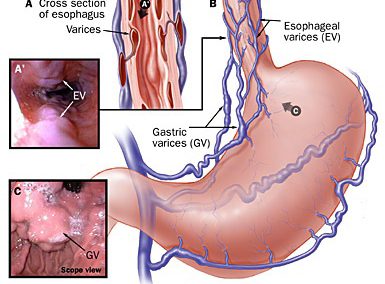 Because of the serious consequences of bleeding, and because treatment can reduce this risk, experts recommend that all people with cirrhosis undergo testing to determine if varices are present. Patient with cirrhosis are recommended for testing to rule out varices before they bleed.

Treatment and Management with varices without Bleeding

Treatment and Management with Varcies and Bleeding