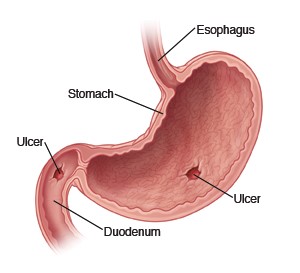 This term refers to both gastric and duodenal ulcer disease. Peptic ulcer disease (PUD) is characterized by a defect in the gastric or duodenal mucosa that extends through the muscularis mucosa into the deeper layers of the wall. In addition to acid vs defense imbalance, there is mucosal damage by H. pylori (VacA, Urease, Protease, phospholipase) products or other potential non acid injuries. There is usually a mixture of acute and chronic inflammation 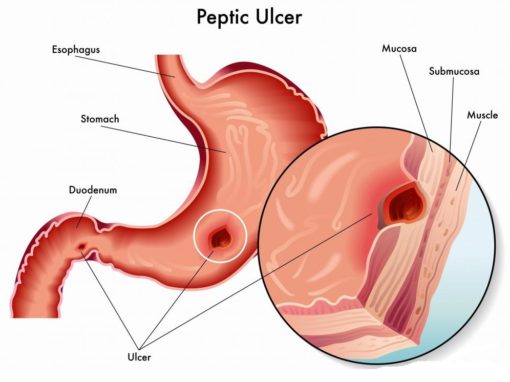 You can’t tell the difference between Duodenal and Gastric ulcer just based on symptom from eating, because its only suggestive and hence need upper endoscopy to tell difference. The threshold to scope is low (45 years old with epigastric pain) because need to exclude cancer since cancer can be a cause (4%) of ulcers.

The most accurate diagnostic test is upper endoscopy (if positive, there is a need to biopsy the ulcer for ruling out cancer). Biopsy is important to distinguish type of ulcer and also rule out ulcerating cancer.