Diabetic gastroparesis defines as lack of motility of the stomach due to lack of responsive whether sensory or effector functions of the nervous system innervating the stomach.

Any deviation from the series of ordered and coordinated process can result in delay in emptying of the stomach. 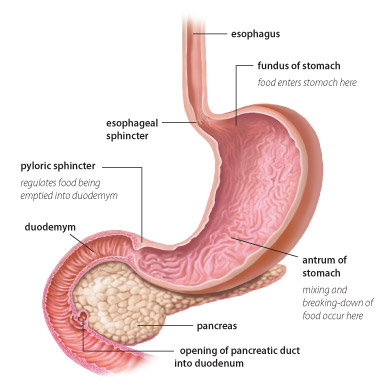 This is due to long standing diabetes mellitus especially with poor sugar control for more than 10 years. The lack of sugar control lead to neuropathy and hence the stomach and intestines cannot sense stretch from food. (nerve supply to the bowel is impaired)

As mentioned, usually stretch and distention of intestine and stomach leading to motility. Gastroparesis lead to autonomic neuropathy leading to dismotility from inability to sense stretch hence no normal motility.

Vascular damage to the nerves of digestive tract affect a person’s ability to detect the stretching and distension of the stomach on food arrival.

Cause of Diabetic Gastroparesis

Gastroparesis should be suspect if a patients present with nausea, vomiting, postprandial fullness and early satiety. In addition, abdominal pain, or bloating can also be commonly seen.  Imaging are usually used to rule out mechanical obstruction with CT or MRI or upper endoscopy. The presence of delayed gastric emptying on scintigraphy establishes the diagnosis of gastroparesis. Clinically diagnosis occurs usually but can use (nuclear gastric emptying study scintigraphy which is considered the most accurate study but rarely needed)

Initial management of gastroparesis consist of dietary modification, optimization of glycemic control. If symptoms are persistent, medical treatment can be commenced.

You can commence medication with prokinetics like metoclopramide in all (mild, moderate, severe gastroparesis) and antiemetics like benadryl.

Other medications include motilin domperidone, erythromycin.

In patients with refractory symptoms despite dietary modification, prokinetics, and antiemetics, more invasive approach may be considered. Placement of a jejunostomy and venting gastrostomy tube for enteral nutrition and decompression, respectively.

Gastric electrical stimulation only in patients with gastroparesis with intractable nausea and vomiting despite medical therapy for at least one year.