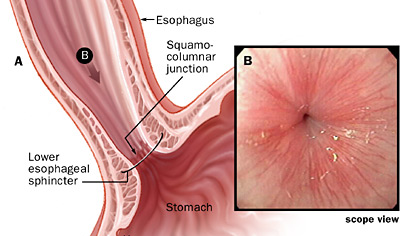 Barrett’s Esophagus is a complication of GERD. It has to do with metaplasia of lower esophagus mucosa from stratified squamous epithelium that normally lines the distal esophagus to non-ciliated columnar epithelium (glandular type: protective type of epithelial cell) with goblet cells (seen in 10% of GERD patients). Barrett esophagus is a precancerous lesion that can lead to adenocarcinoma of the esophagus and therefore most be monitored and prevented in patient with chronic acid reflux disease.

The cause of barrett esophagus, as mentioned is due to long standing lower esophageal acid irritation (GERD) leading to metaplasia as an adaptive approach to protect the mucosa of lower esopagus from acid damage. This typically occur in individual with 5 years of GERD.

Other causes or barrett esophagus not due to reflux disease include oral bisphosphonate.